Riding some clean glass conditions for the first time in ages, I had a great feeing of pumping at what felt like the absolute top of the mast. The acceleration on each pump was amazing, and effortless glide. This must be the key to unlocking efficient links.

However, on the Axis 880 HPS, I found that when I inevitably breached because of
pumping so close to the surface, the ventilation would persist. The recovery was sometimes viable, but then impossible to regain any real rhythm from all the effort. It felt as if the ventilated wing stayed ventilated for at least another pump.

I wonder if this is the next frontier for better foil design.

Water testing in the biggest tank in Europe has refined the H-series tip shape to allow the tips to breach and re-enter without cavitation.

(afaik cavitation is a different thing, water evaporation due to low pressure, wonder if that is a mistake from Cabrinha. maybe not https://www.sintef.no/en/all-laboratories/cavitation-tunnel/
)

Anyone have any experience with high aspect foils that breeze through tip breaches?

Almost assuredly a mistake by the cabrinha marketing team. Surfers are not very smart, and the “cavitation” explanation has been going around since foiling started. With Kai Lenny still saying it. Only foil brained people who actually pay attention have switched to saying ventilation.

Wait you breach while pumping and don’t immediately fall over?

Anyway I wonder if adding something like this would do anything 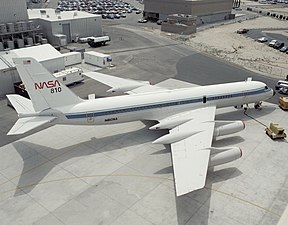 Anti-shock body is the name given by Richard T. Whitcomb to a pod positioned on the upper surface of a wing. Its purpose is to reduce wave drag while travelling at transonic speeds (Mach 0.8–1.0), which includes the typical cruising range of conventional jet airliners. 'The Cambridge Aerospace Dictionary' defines shock body (also known as Whitcomb body, Küchemann carrot or speed bump) as a streamlined volume added to improve area rule distribution. The anti-shock, or shock body, was one of a num...

For axis, the ART foils are significantly better than the HPS or BSC in the ventilation department. notice the noise change more than the feel when breaching a tip on the 999.

I think I agree on ART, especially while turning and loading the inside wing, the outer tip popping out is barely noticeable, as long as you have sufficient speed.

However at slow speeds and lower angle I don’t think I’ve ever breached a tip and recovered, while I noticed on the HPS I was able to recover twice, and could feel the ventilation sticking to the wing and then releasing (I think…), granted the HPS is pretty dated and simple relative to the ART, I presume the updated version would address this.

On the Axis PNG yes no problem, but it feels pretty much like a low range truck while pumping, just grinds on. HPS slightly less but for the speed it works. ART is as you describe, unless flying along if the tip breaches then I go down.

Maybe you are thinking of wing fences? Similar. F-one has used them on their tails, but I think would be too fragile for main wing. I’m interested in trying it DIY on the HPS, but I don’t really know how much they are designed to work in conjunction with ailerons on a plane. Also they seem to address a different issue (spanwise flow?). However I’ve seen them pretty often on the mast of offshore sailing foil boats, so they must have some value

Pages for logged out editors learn more Wing fences, also known as boundary layer fences and potential fences are fixed aerodynamic devices attached to aircraft wings. Often seen on swept-wing aircraft, wing fences are flat plates fixed to the upper surfaces parallel to the wing chord and in line with the free stream airflow, typically wrapping around the leading edge. By obstructing span-wise airflow along the wing, they prevent the entire wing from stalling at once, as opposed to wing...

On the other general designs being applied, here are some pics, seems that some deflection at the tip is where this leads: 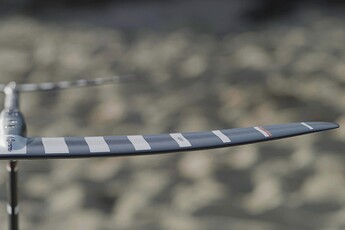 ART 699 has a new design that breeches tips without crashing.

Bsc wings have so much chord that can help you to save a breeched wingtip.

I’ve ridden the new Cab 1050 and 850, they breach a lot better than any foil I’ve ridden, you hardly feel it, of course, it depends on the angle the wing comes out at.

I think beach recovery is ok on most foils now as long as you have power from either a wave or wind wing or kite. Especially if breaching while turning. I’ve never recovered from a flat breach while pumping though. Finding that if I pump too hard while riding high on the mast you can “plunge” the foil where even if you don’t breach, pushing down too fast and sucking air down to the wing? Anyone else feeling that? I guess the solution is to glide a bit longer or angle down a bit more before initiating a pump?

I agree - I think most newer foils handle tip breaches as long as you have speed and you’re in a turn. Breaching when pumping is a different thing as the wing is more or less parallel to the water surface so you’re getting a full ventilation - if that happens to me I pretty much always fall no matter what foil I’m on.