This was super interesting, thanks Matt

Matt, thanks for this info. I find compared to surfing foiling it is much more critical to understand the larger scale impacts of coastal geography on swell quality and direction, and more critically, the impacts of current on how wave energy can consoidate and disperse.

Here in SC we have a continental shelf 20 miles out and its amazing how that turns all directions of wave energy into onshore energy (depth gradient slows the wave closer to shore and bends that energy towards shore?)

Also we have huge tidal river systems with alot of water moving on the outgoing tide. The way that the outgoing water acts as a lens to focus the energy on a specific bar is astounding. Add into that the outgoing tide carrying you back out to the outside bar and its been a recipe for some of the best foiling on the planet. Its also so far offshore you never know to look for it without knowing about whats happening with that energy. There’s dozens of these breaks in the southeast. The possibilities are endless.

Completely agree, I feel like my relationship to the ocean has a new lens or dimension, where surfing it’s so simple its reduced almost to a commodity. Feels like someone just invented flying and so anything is possible.

Some additions to the Oceanography thread I’ve been following: 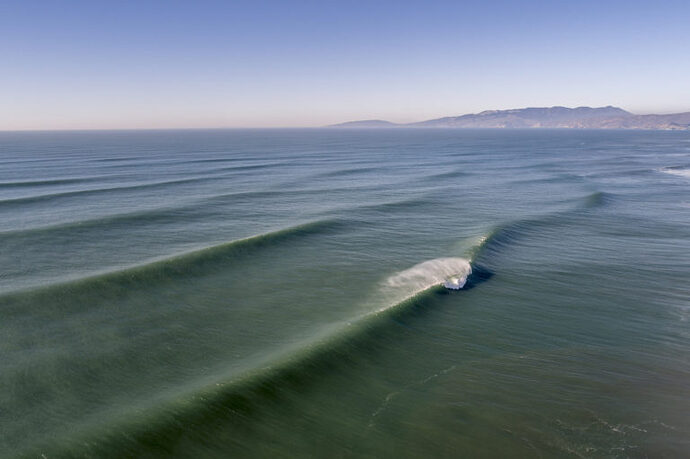 Do you a link to the Oceanography thread you’re following.
Love this stuff although have a hard time wrapping my head around some of the points

@JohnVu sorry that was a phrasing for “i’m interested in, and digging into, and pulling on a” thread of oceanography. Posting back the interesting snippets here

Super helpful stuff thanks!
And I agree, looking at waves in completely different light. Fun stuff

Love this Matt! Thanks man

No worries Erik, it’s fascinating space. Ordered the book so that I can get to grips. How many waves I’ve taken for granted!

Turns out waves are not sine waves but “Gerstner” waves - which leads to a few game developers trying to simulate the interference/interaction of waves which is pretty cool and complex:

Possibly the most interesting concept from this whole thing that I never grasped.

The reason waves like Padang/Restaurants etc only work on long period swells is due to the depth of the circles of energy (eg 17s swell reaches down ~250m/1000ft in image below), and it is some combination of swell direction and that depth that starts to drag on the bottom, slowing that part of the wave down and bending it in and around the sheltered Padang headland. If the swell doesn’t have the “depth” then it will not start the bend early enough wrap the corner, and run straight past. This is somewhat obvious but I have not found a satisfying image that demonstrates this 3d interaction! Surfline has excellent stuff here:

Now, let’s take a closer look. Raised off the seafloor is an even shallower seamount located about four-five miles to the southwest of the peninsula, with a depth of roughly 130 feet. This will focus swells as they near the peninsula, and the longer the period, the greater the focusing affect will be. Moving closer to shore, the waves turn further to the east and ultimately converge in the area near the end of the peninsula. 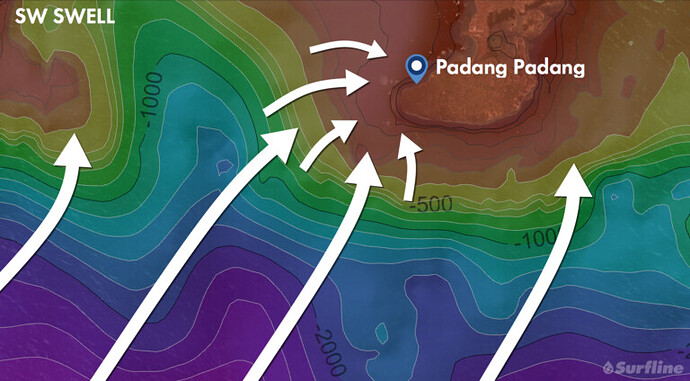 Two other links (this forming a working note-pad)

Explanation on why bathymetry matters for wave energy