Deck concave - yes or no?

What feelings do people have on deck concave? I have a Sunova Pilot with concave described below and sometimes I feel like it would be great if it was more pronounced, especially with wider span foils to give you a feeling of moving towards an edge as you move your feet out.

I liked having a nice progressive concave on downhill skateboards, so can imagine similar feeling with the foil, but don’t really know where people are going with this.

We have a concave deck to get the rider as close to the foil as possible while maintaining the volume needed. It’s a soft concave without any drastic edges so it doesn’t trap water on the deck after takeoff.
https://sunovasurfboards.com/en/foil/surf1/pilot

Benefits of a concave are maybe increased rigidity and reduced deck thickness?

Some pics for reference 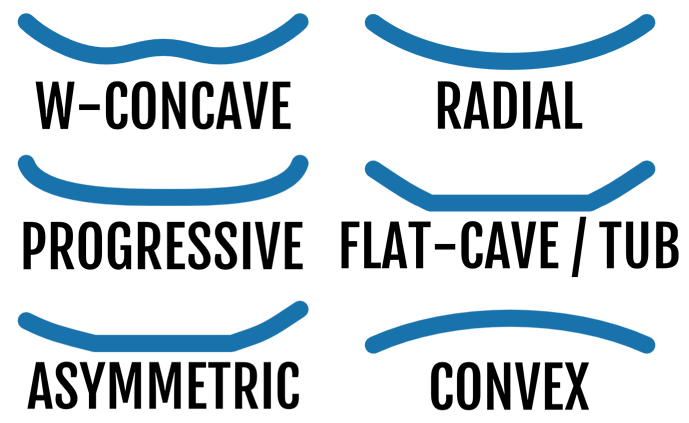 I really like deck concave. The few times I have borrowed a board that has a flat deck I then realize how much I love the concave. I am sure there is a point when it becomes too much but haven’t found that yet.

I suppose the origin for a bunch of the shapers is in surfboards where a nice concave is physically impossible with the requirement for sharp bitey rails, that really isn’t as much of consideration with foils, save for the foam rebounds and tail touchdowns.

I haven’t looked at the geometry of a concave vs flat, but it definitely feels like it gives you more leverage on a skateboard, and it certainly gives your feet a reference for where in the board you are standing, both positives

I built my custom board with deep deck concave 2 cm .
Even for pronefoil and kitefoil pocket boards.
It give finaly the same feeling as your foot on a skateboard , ability to know where the foit is exactly and conpensate pressure.

I like concave deck, both on prone and on sup. Kind of deep on the sup to add more volume without having too much foam under my feet.

On surf foil, slight concave deck, I like the feel when you paddle, you are locked in, I like the extra control you get from this.

I think clearing the front foot is the biggest advantage of a CC deck, my first prone board was a converted surfboard with a heavily domed deck and I had lots of trouble tripping on my front foot at takeoff. When I made a board with CC deck the tripping issue went away.

I tried a concave deck on a 5’8” x 25” sup. The concave was 3/8” deep in a 10” span. I thought it was great for winging but I didn’t like the extra sensitivity while going downwind, pumping or surfing so I sold it to a winger.

Good Q! Personally I like the sunken deck (flat-cave/tub) in front and progressive in way rear like a skate deck actually. The rational is that concave in front is too sensitive, foils take almost no pressure to rip into turns with the front foot, plus when pumping the feet can get a little crazy and flat isn’t that sensitive… Now the secret sauce is when you move your rear foot back into the concave for for real turns that you need allot of pressure to level the foil out…
Tried this out on numerous boards and a few friends. New foilers usually think they want concave to tackle where to put their feet, but imo it can be a determent. I’d suggest a center line bump with higher eva foam for confidence on foot placement.
Yes to your point that the curve generally increases rigidity, which is good. Noodles, no good.
For reference this is on 4’4-6" prone boards…

Since original post, my latest board is perfectly flat (4’4 gong). Somewhat surprisingly I haven’t really missed the concave at all, so perhaps I’m not at a level where it’s significant.

I do like the idea of a centre reference line.

On second thoughts for the skate reference - one usually has heel and toe on the rails due to the narrowness, where as with foil bord you’re moving them around way more.