Winging destinations in December and January

Looking for recommendations on good warm places to winging in December and January. Unfortunately those months seem to rule out the most talked about spots like Maui and the Gorge.

I’ve found a few places with exceellent wind statistics in December and January like Cap Verde, Bonaire, and the Philipines. Not having much luck finding out wing and foil related things for these areas like reef depth, beach break w.r.t launching, etc.

Any and all suggesrions welcome! My priorities are reliable wind (time on foil), then access to some waves. Downwinding possibilities definitely a nice bonus. I’m only a year in and have work to do on gybes and tacks still so looking for mushy and error tolerant, not epic and scary.

Never winged there, but kitesurfed many years ago. Jericoacoara-Brazil seems to me a world class wing destination!
Wind, a mellow pointbreak and super nice vibes at night… Cabarete is great for winging and super convenient/cheap. Gets good morning surfing with glass and then solid afternoon winds. Fly into Puerto Plata 15mins from the beach.

Cape Town works for the euros

The Signature foil crew based there and know where to go

I’ve been to Maui a couple Decembers with a focus on kitesurfing. It’s off-season for wind, so hit and miss, but both trips I’ve managed to get on the water 95% of days. On light days, the locals tend not to bother when it requires a big kite or foil. This was pre winging – from what I’ve been reading, it’s pretty much daily for winging on north shore, if you have a big wing. Dec is surf season too, so plenty of swell to play in, so if sup foil / surf foil are a backup option for you, then that makes it near certain not to get skunked.

Hi @silas !!
Were are you based? I’m from Colombia in the north caribbean part, I live in a small town called Puerto Colombia, 15-20 minutes from Barranquilla (a main city) were you’ll get a good offering of reastaurants and shopping and the regular stuff a city can offer.
In Puerto Colombia we have our foil heaven, a mellow long wave that when it gets big it never breaks hard so it’s an awesome place for winging and improving. Sand beaches, boardshorts, easy entry.
Mareta Surf on Instagram: "More lines on the @cloud9surffoils F28 🌊🌊🦅🦅🇨🇴🇨🇴 @goprocol #gopromax #gopromax360 @cloud9surffoilsinternational @coguakiteboarding @ppcfoiling #loyaltothefoil #foilheaven #wingfoildaily #wingfoil #foiltheworld" (it’s a 360 but you get the idea on the spot)
google map
Google Maps

At Puerto Velero (15-20 minutes from Puerto Colombia) there’s a protected bay were you’ll get a flatwater spot on the inner side, and beach break punchy waves (for intermediate to advanced riders) on the other side.
Google map:

Also you should look for Salinas del Rey, it’s a very famous kite spot and also a mellow wave with good glides, but full of kiters so I don’t like going there too much, but there are some good hostels around close to the spot with a Brazilian Posadas kind of vibe.
Google map spot:

All these spots can be connected downwinding and are in a 25 to 30kms coast full of beaches and good bumps and glides.

Check my insta if you want to see about the conditions around.
@maretasurf
Have a great one!

Sorry!! Missed the most important… here we get very consistent winds from late december till april with 18-25knots … I’m 70kgs and ride 2.3 or 2.8 in wind season. From late april till july you get to sail a lot of days in 12 to 20 knots. August till november or mid december (depending on how rainy the season gets) it’s rainy season, some days able to sail but not the season.
I would book in january, as it’s stronger and more consistents winds and windswells.

La Ventana is where everyone I know raves about, but I’ve never been. Strong winds all winter. Probably many other places in Baja are waiting to be discovered on the wing. Plenty of waves on the Pacific side too.

Some great info here, thanks everyone! Colombia, Puerto Rico and La Ventana are all new spots to look into, pretty excited.

I knew about Jericoacoara and Cabarete, both are very much on the bucket list but Dec and Jan are end of shoulder and into rainy season in Brazil and straight up low wind season in Cabarete according to friends of friends who go to both spots regularly.

@juandesooka , thank you for the winter season report for Maui, that is the kind of info you can’t find in wind statistics or general spot writeups!

@OmarFoilCol thank you for literally putting your home spots on the map! The area certainly checks all the boxes with different breaks, downwinders, and lots of wind, will definitely look into it more.

General note about winging: it’s kind of rewriting the books on wind sports in some places. EG I am on a SoCal foil discussion forum, winging is taking off there among the surf community, in a place that has always seemed just not quite doable for wind…that dreaded 8-10kt dead zone. But with 7-8m wings they are making it work, and most importantly, if you have a surf focus, then it makes light wind slogging worth the bother, once up on the wave riding you don’t need wind.

Similarly, a buddy is visiting Nova Scotia for work … the wing potential is massive, windy place with waves, too blown out to surf, launches too sketchy to kite.

Anyways, back to travel spots: I was in Tobago briefly a few years ago in Nov. Their off season, but I got out with a 17m kite and then sup’ed an outside reef. I am anxious to get back…pretty epic set up, if you are able to supplement the no-wind days with surf foiling or other forms of surfing. That’s the ticket for skunk-avoidance.

I have been on SAL Santa Maria, Cap Verde, in March 2022 for 5 weeks. Foiling every day. Wind was so constant and strong.
It is such a nice place with good food, awesome local people and on budget.
You can do downwinders from kite beach to Santa Maria.
Check out Angulo-Beach. Great place.
I will be there for Januar / Februar 2023.

Have heard good things about Barbados - going to check it out myself in Feb.

Yup… going to Barbados in December for 2 weeks with my family… mixing winging, proning and downwinding … and some kid friendly surf too!

Barbados can get some insane seaweed that would prevent all foiling, not sure how frequent it actually happens but can be awful

Good to know… I’ve heard nothing but good things from foiling friends so fingers crossed ! Not too bothered either as surfing with my kids is priority (honest!) Will update in December!

The seaweed is called Sargassum and it can be pretty widespread in the Caribbean. It depends on winds, water nutrients, but mostly water temp and typically it is only present during the summer months when the water is warmer. You never know, but I don’t think the risk is high before March or April.

I just returned from a fantastic trip to Port Aransas, TX, sleepy TX beach town in the winter, great reliable wind. I was on foil every other day for almost 2 weeks in 12-25mph wind, mushy gulf waves were difficult to prone on, but the winging was amazing. Winged at Port A Jetty, the Packary Channel, and Wildcat park in Portland, TX. I even saw two guys down winding from the Port A jetty to Mustang Island area one evening.

I was in Bonaire this year at the end of Feb through the beginning of March and it was windy every day for 3 weeks straight.

The wingfoiling spot is Lac Bay on the southeast side which also happens to be a famous windsurfing spot. 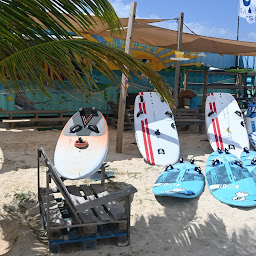 The wind is offshore there so it’s always glassy with no waves and deeper water away from the windsurfers who mainly ride in the shallower areas.

There is an inlet to the ocean about a 10-15 min ride upwind from there or you could drive around to it and launch from the fishing village. There are small non-breaking rollers coming through the inlet but they don’t last long. There’s a shallow reef they break on at the mouth of the inlet but you don’t want to fall there. I scratched my foil on the reef several times.

Sargassum/seaweed was an issue but it varies throughout the year. It wasn’t too bad the first week but the last two weeks it got pretty bad. They actually had a cleanup operation going on to remove all of it that would build up on the shoreline of the bay. Locals report it’s not there most of the time.

There’s no where to surf foil, all of the shorelines on the east side(swell side) are jagged rocks.

My friend Dasher lives there now doing wingfoil camps and lessons so I could always give you his contact info for more detailed information.

I’ve added some pictures too. 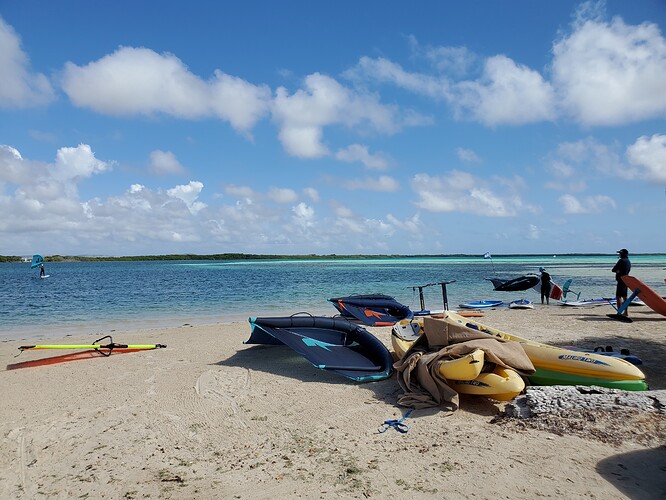 Barbados delivered in every aspect for me and my family! Fun easy waves for my kids / wife / foil … consistent trade winds for winging … surfing with turtles and rays … oh… and bath warm water…

Cost of food was astronomical

For proning, where we were staying, the surf never got bigger than chest high and was inconsistent enough (setty) that I only used my 1099 … was heaps of fun though. Only spotted 4 other proners… 2 beginners and 2 guys who were under foiled for the conditions… local reception was mostly warm to the foil… only one guy (a wave hogging longboarder) got vocal about ‘no foiling allowed’ … I was polite and kept my distance from everyone and only took scraps… everyone else was super friendly and enthusiastic and laughed at the ‘no foiling’ comment. Where we were wasn’t a great learners spot for foiling and will probably suffer from a crowd of good foilers so I won’t mention it’s name… pretty easy to find tho and accessible with a dose of respect …

My legs were cooked boarding the flight home … foiled / surfed everyday… would definitely go back… lend me a tenner ?!