Creaking and squeaking from foil box

I built a E3 knockoff about 6 months ago. Built it a bit wider so I could use to learn to wing. Its 6’2"x24.5x6". 1.5 block foam w 6 oz E glass over 4.6 oz carbon, with additional carbon patches around foil box (bottom and deck). Standard closed cell foam ride engine type of track box routed in and glued in with west systems 404 (I think). The board is bomber, and likely a bit overbuilt. I noticed when I routed in my bottom handle (fcs without the vent) that there was some melted foam around the front of the foil box from the track box exotherm, and being in a hurry I did nothing about it.

Anyway when I whip into a wave the board literally starts squeaking when I pump. Sounds like someone having sex in the next bedroom. Pulled all the bolts, lubed the foil- still squeaking. Switched to my buddies board yesterday (same build and materials) and no noise. I can torque on the foil box like crazy with the mast and I can’t make it move at all, nor can I duplicate the creaking sound on land. Im thinking the closed cell foam box is moving slightly against that void.

My plan is to drill 4 pillars w a forstner bit through the deck to the track box, and another into the void. Then fill the holes with 2 part expanding foam 2lb. I would do multiple small pours to keep the exotherm down. This will give me closed cell foam attachment to the deck. Im going to skin that over and try the board again to see if that works. If not Ill have to cut the deck out and put stringers alongside the box and pour foam all that in. Im using stringers and standard boxes from now on. I dont like the standard box rectangle holding all that torque.

Hi Kelly,
Squeaking means she’s gonna break, very likely the noise is a fracture point that rubbing as you’ve figured out. Since you’ve checked the obvious culprit, could be the rails or top deck as they transfer the force from your feet to the mast.
Can relate, I make boards as well and also weigh a more than your avg foiler. One thing I did in my shop is make a mast mount to test out different box designs. Since you’re a DIY guy you could do the same in a couple of minutes. 2’x2’ piece of 3/4 plywood with a cross braced 1’ - 2x6 then I found some scrap metal and trimmed to the Lift dims. Works well and now I put all my new boards on it to test out before they hit the water.
Regarding repair… you got the skills, just make a new one, lol. donate it to your next DW buddy for the cost of materials. If you do want to try your luck I’ve found carbon top to bottom through the entire board to create an ibeam. Consider doing this for the entire with of your stance. Here is a DW, if you look close, you can see the lines of carbon running up from the box.
Good Luck! 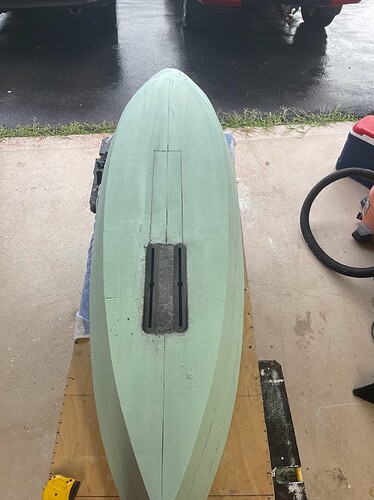 So I made a mistake. Used too long of M6 screws to connect the foil to the board. The screws have been pushing through the tops of the fin boxes.

Do you guys have any advice on how I should DIY fix that? I was thinking filling the box with a thin layer of epoxy.