Looking for everyone’s recommendations on foils for riders between 70-110lbs. Especially which ones would be good for beginner foilers/wingers. My kids are learning on my old GoFoil Kai and Iwa wings behind the boat. Interested in any and all information related to teaching your kids to foil!!

The Olaian foil looks like it could be a good option. I’ve never tried one and haven’t seen them sold in the US though.
https://www.decathlon.fr/landing/surf-foil-securise-olaian/_/R-a-surf-foil-securise 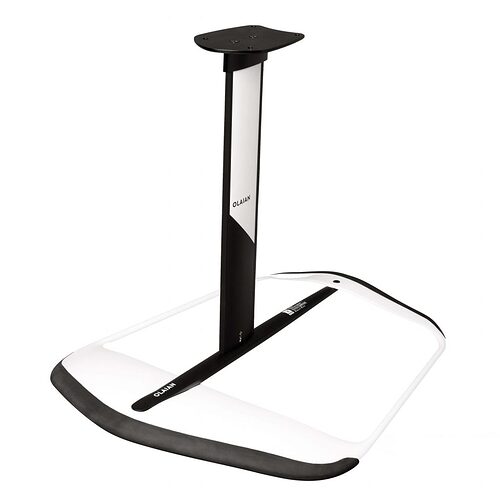 Tried different axis foils but found initially the 1099 was great because it was very stable in roll and could go slow … had no issues with them hitting it but did have them wear helmets and vests (all NP) … I was surprised how much speed tho they actually did need to get flying… more than you’d expect … could slow down once up though.

Have also had them (regular) surfing, plus winging and downwinding on a non- foil SUP board to round off the foundations … they’re probably a year away from independent foiling but there’s no rush …

Right on. We also started them (13 and 11) on a big board so they could stand before we got going. Transitioned my 13yr/old to a wakefoil board and am transitioning my 11yr/old this afternoon. Also going to put both of them on the Kujira 1210 today so they can continue trying to surf the 2nd wake without the rope.
Yep just a little at a time but man it will be so great to get to share the stoke with the kiddos!!! Hoping my wife will take to it also but not holding my breath….haha
Still wanting to get a GoFoil setup for the kids (80-110 pounds) so definitely looking for recommendations there.
Dave

Thats amazing, how long did it take to have them comfortable on foil?

I wouldn’t say they are 100% comfortable on foil yet, but they were well able to foil behind the boat almost straight away … The main issue we had was the rope length. It was slightly too long to begin with, and their board would be just behind the 2nd wake and struggling to take off… We shortened it 2’ and things went better!

My 9 y/o daughter is very comfortable with the foil idea though… She often swaps her surfboard for my prone setup when the surf is small and i’ll push her into a few. She’s only managed to actually take off and foil for 5 seconds, 2 or 3 times so far… but she’s definitely not scared of it, and the seed is set and slowly sprouting in the background ! She doesn’t want to learn to wing on an SUP… Just wants to get straight on a foil!

Tell us your story… !

9 and 12 year old girls started on 110l windsurf foil board but that was too big so progressed straight away to 70l Gong Lemon. Now (2 years later) they are on F-one 60l for light winds and Proper custom 36l most of the time. The Proper boards from the US are amazing - soo light, strong and stiff.

For wings they both started on F-One 4.2m Swing and now ride the F-One Strike 5m. Chose F-one since the wings are so light with no hard parts to hurt themselves.

For foils they started on the Unifoil Hyper 250 then the 150. Now they ride the Unifoil Vyper 90 which is an awesome foil for kids.

Buying the kids smaller gear makes sense and helps adults progress down the sizes also. At 85kg, I ride the Proper 36l board and Vyper 90 in stronger winds.

In terms of wing size for 9 to 12 year olds, 4m2 is an ideal starter but they could learn on a 5m - they learn soo fast!

Size and weight of children would make a difference to these ‘average’ recommendations.