When it comes to foot stance in prone foiling, centered or offset, and why?

On a prone I am pretty close to centered just slightly off. Feels right to me and I can pull off and go straight into pumping without adjusting my feet. When it comes to Winging my stance is really offset, I feel like I just need it for the leverage. I also tend to move my feet more on the wing board than I do on the prone.

Offset definitely helps to control wider wings. I hang my back foot over the toeside rail on my board when I get up wrong. When I’m in the correct spot I’m slightly offset for prone.

As long as your feet are evenly offset it works out fine. I don’t understand how people prone in straps.

What foils are you riding?

Evenly offset for me especially on higher span foils. Mainly been using an 899 span lately and the extra torque I can generate is next level. Both for pumping, turning and white water hits

I get the torque in turns but it feels limiting to me in pumping. How can offset benefit pumping? It limits push off the toes on the back foot as it induces a turn.

The most efficient pumping is a very narrow stance. Kdmaui is a good example. Jack ho is another who closes his stance and stands super tall to be efficient. You can be offset or centered. It’ll still be more efficient than a centered wide surf stance.

I think offset comes from having to keep your upper body more open backside on a foil. But even surfers do it now too. Look at Gabriel medina’s backside barrel technique at the wave pool. He literally comes out of the barrel, Places his front hand on the deck and recenters his feet.

If you’re evenly offset you shouldn’t be inducing a turn when pushing with either foot in my mind. But it’s also beneficial to move your feet constantly depending on what you want to do.

@CoachCasey says his feet were parallel stance both feet were narrow stance offset, toes pointed forward at the end of his 200k marathon foil. He was pumping fine that day.

I started off windsurf foiling, which is a super offset stance since you have the sail base as a third point of leverage so it works well. Using the wing is kind of like a third leverage/balance point, but once you flag the wing and ride swell I find being offset screws with my ability to shift weight forward without leaning the board to the heels. Felt weird and took a while to adjust to an almost centered stance winging, but makes the transition from wing to swell power instantaneous and keeps the ride lively. Try driving into a toeside bottom turn or cutback with an offset stance while accelerating down a swell face without over foiling. Then try it centered!

Through wingfoiling I developed an offset stance that I never used BITD for surfing. I’ve unconsciously applied a similar stance to wake foiling (which I do a lot of) and for prone foiling.

A bit offset but not too much, I’m not comfortable if too much. I guess there is no good or wrong.

Adam, not so much offset while James and Mike super offset.

If you are talking about Adam Bennets then look closely on some of his latest videos. He’s definitely offset.

I didn’t look closely but it seems Adam is not as offset as you or James or Zane.

Ya I agree, he’s definitely not quite as offset as we are but he’s still gravitated to being more offset as compared to his super early videos. So interesting to me seeing that evolution happen naturally with a growing number of riders. I started fully centered and just noticed over time that I had evolved to preferring an offset stance.

One of my friend has moved to a very offset stance and he is ripping, so there is definetly something. I think those new boards with the wide point more forward, the offset stance comes naturally, no ?

Really though what makes the most sense to me with offset riders is an asymmetrical board, but I don’t think the masses are ready to embrace that yet

Offset definitely has advantages for leverage, which allows tighter lines but at some point it takes away style. When trying to identify a trend I like to take it to the extreme. And in this case its the difference between a one wheel and a segway. Or snowboard and skiing. I’m a bit offset and on bigger foils go a touch more. It’s going to be interesting to see where it all lands. I think style of riding will be the determining factor.

Personally im riding centered when prone, winging im fully offset but when i need to pump back out i find it easier to pump with centered stance.

I think wing development has played a big role in how stance has evolved. Riding the wider span high aspects the greater leverage forces required to roll them and transition between turns means a more offset stance gives you a faster and more responsive roll. I find as I go back to narrower span wings my offset also gets less. Similar if I’m riding a twitchy tow wing then my stance is almost completely centred.

Pumping I also find your stance can change depending. If I am prone and in smooth water where I don’t need to worry about the roll of the wing then I am as centred and narrow as possible with my stance. But if I am downwinding or in more turbulent water I keep more of an offset while pumping to be able to deal with the wobbles or unexpected changes. Even things like mast stiffness come into it where a flexier mast is easier to control the delayed loading/rebound of a softer mast with an offset stance.

Here is my stance.
I m trying to change it cause it is link to my waird pop up. I do not reach each time to have my leg iside my arms and sometime my front knee go outside my arm diurinh the pop up.

But finaly when i compare to when i wing . It looks similar.
Compaire to my friends they looks to have a lot more larger stance . My back foot is on the top of the mast. But really outside the board.
My board have a deep concave on the deck witch make me really easy to know where i m like on a skateboard. And it change a lot 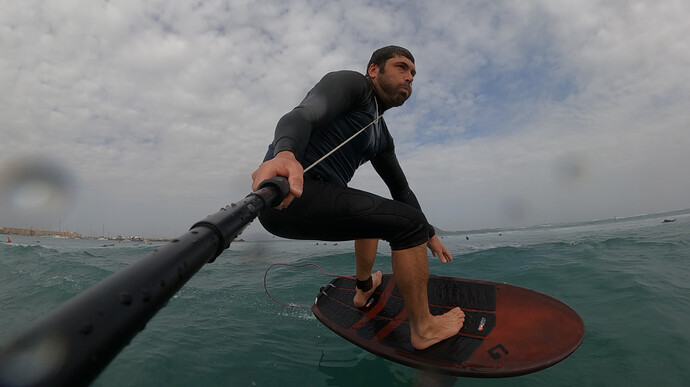