After a bunch of “prep” work: harbor paddles, learning to sup in waves, listening/reading/watching all the online materials… I finally bit the bullet and swam out off shore with my board and paddle in a virgin attempt to dw sup. It was only about 10kt of wind. I was using the gt2200 I just got. Basically turned out to be 2 miles of paddling false starts with one successful pop up right near the end. I was so surprised with how easy I got up ( and that I got up at all ) I basically kooked out and came off foil after about 2 seconds of glide…

I will say all of the prep stuff is helpful, but nothing compares to just going for it and finding out which parts are hard and why.

Glad thats over with.

Always hard the first times, but it’s so worth it!

Try a 1° baseplate shim I. The back on the 2200. You will need to run the rear plate bolts without washers or find longer bolts. Don’t worry about breaking anything. This should help you lift the foil off the water!

If you don’t have a shim grab some nylon washers at the hardware store that are slightly thinner than your Gofoil aluminum ones. The wider diameter the better.

When waiting for a bump, I usually have the most success not moving rather than paddling downwind. My guess is more bumps pass you so finding a good one doesn’t take as long.

Well it you got foiling on your first ocean run I’d say that is a win! Ive certainly had plenty of paddle slogs back in the day on the wrong gear. How I wished I had the same gear back then as I do now. Winging certainly distracted me from SupFoil for a while but back at it now and loving it. I did a quick 3.8km run few days back on my GT2200 and managed whole run up on foil. I actually like using my big foils as they ride slower and makes a short DW run seem worth it when you only have one hour to spare.

I went for my first Ocean DW SUP run today. Was definitely a bit trickier in terms of water moving in different directions. I found what worked for me was patience. Wait for the right bump and get your timing right if you are just getting out there. Also, have a good rest between attempts especially if starting to get fatigued. I found the bay run techniques transferred well there is just more going on and bumps move faster. I was only out in 15 knots but I think this is also a good beginner strength.

It is true though, nothing like getting your teeth into and getting out there. I do think the bay does help to minimise a few variable and keep the bumps steep and slow. Timing in both scenarios is key.

awesome insight. i’ll give the shim a shot.

ive been paddling the entire time thinking if i have a little momentum maybe it would help ( and keep me straight ). staying still makes a ton of sense and saves some energy. burn out happens quick!

i think i remember seeing your board on one of your posts. it looked similar dims to mine. how far forward are you running the 2200? i did a pass with it way back, which is when i got up. thinking i might could get more lift i tried a run moving it pretty far forward and got bucked quick on an inside wave. didn’t get up in the bumps at all, but that could just be because im terrible… thinking further back will be the way ( perhaps with the shim ).

the spot i’m trying is predominantly side shore at a point to more on shore going into a cove. so wind and swell are a bit more crossed up initially and then sort of start heading the same direction. which probably accounts for why i was able to get up later in the run. we keep averaging about 10kt, but i feel like folks are able to come up in the flats, i should be able to do it more consistently with a tailwind.

were you able to get on foil, stay on foil, during that first run?

I recently changed my board to a Sunova 6’3x24”. My GF mast is at back of track about 40cm from tail to the back of the plate mount. I tried it further forward but didn’t like it. The lift is the same you just end up needing to be further forward on the board to start and when up and flying. I think the 1 degree shim will be more beneficial to getting up easier.

Getting up in slow moving, steep and organised bumps is much easier than flat if you have your timing right (and a larger foil).

Sometimes slight bumps can be harder than getting up in flat because you are running into the bump in front and they are moving sooooo slow and not providing energy.

Multi direction swells and bumps can be quite tricky.

I did have success for my runs and kept on the foil but I have practiced quite a bit in the bay where I am and have also done a lot of winging DW on the ocean which helped me read the more complex multi ocean bumps.

Keep at it! Play with tuning until you find what you like, only change one thing at a time though.

My first session sucked as well, at least now we have “learning curves” and instructions and this forum! First time I couldn’t get on foil not once, just had to paddle to shore for like more than an hour in a 6’6"x26" with a 1700 foil that didn’t suit the needs, also I thought that cause I was already Sup Surf Foiling I was gonna be able to make it, didn’t happen. Second time I was a bit more experienced, waited a whole season and winging gave me so much knowledge on how to be on foil, but didn’t made it either using a 5’2"x90 lts which was much better to pop up, and a 1450 HA wing, got on foil a couple of times, but wasn’t able to keep glide for too long. So many things have to happen for you to finally be able to just glide and connect. This is my 3rd year foiling, I’ve improved so much my pumping a surfing and winging that I think finally I’m prepared to hit the goal on the windy season (december till april or may) here in my local spots. Invested on designing my self a proper downwind board (based on kalama designs and other innovators out there) and a truly HA Glider efficient foil, yesterday got my new board and finally was able to pop it up in stormy (about to rain) 12knots and less than knee high bumps and onshore! This was such a huge AHA! moment, now I know I’ll be able to pop up and glide on the next windy season!!

Besides the gear, what do you think clicked this time for the AHA moment?

As Kane mentioned, start paddling at the perfect moment in the bump and not waste any additional energy.
Wait and keep seening bumps pass in front of you, and let yourself feel and see when the perfect bump is hiting you in the back but by seeing it kinda putting your board nose a bit into the back of the next bump, then start with long and profound (if that can even be told) the 2 first paddlings, then as you fill the push, paddle faster and pump the board so it can pop up … If you see videos of the good guys, they get to the point to go up on foil with just 4 to 6 paddles … as soon as you feel it starts to flight, release front foot pressure off the board (move it back) and that’s how I would describe it for me … let me know if this makes sense or gives you a better idea? Or you feel the issue is somewhere else?
Definetly I’m talking about this by having lots of help from my new quiver. Hope this helps.
What board are you on now?

Here a couple pics of my new DW baby! 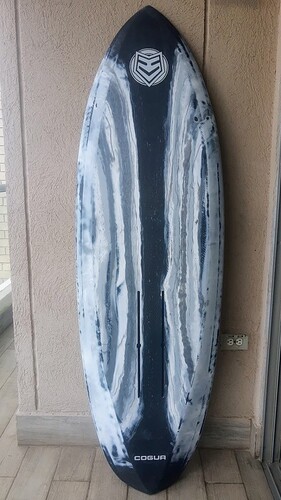 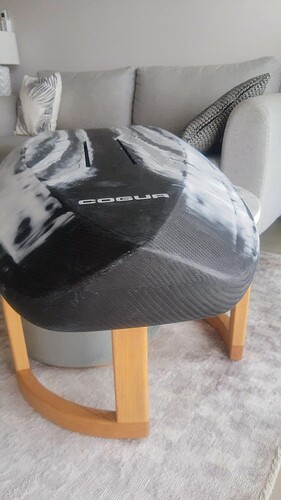 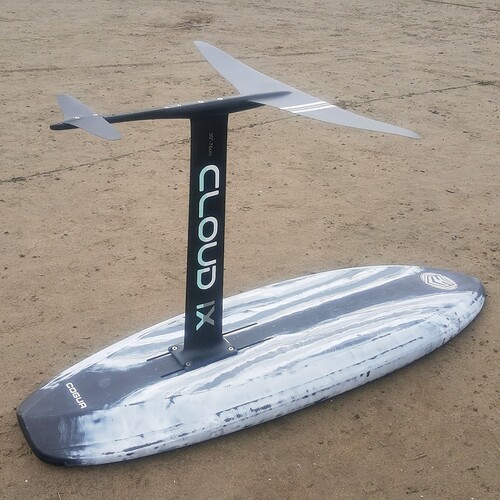 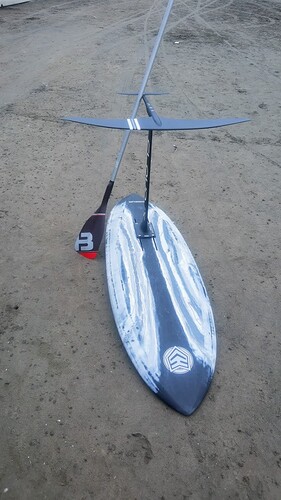 I had a quick ocean run last night at the local just before sunset. Just over 4km.
Light 10 knots, small bumps.
GT2200 / FTL14 / 83cm mast / 1 degree shim.
Stats below.
I liked the 1 degree shim, seems easier to paddle up and felt great inflight. I have a PPC shim which slides in and out with the base plate bolts already attached to the board, it’s a pretty neat design. Still waiting for some solid wind so I can do a longer run on my new board and the RS1150. 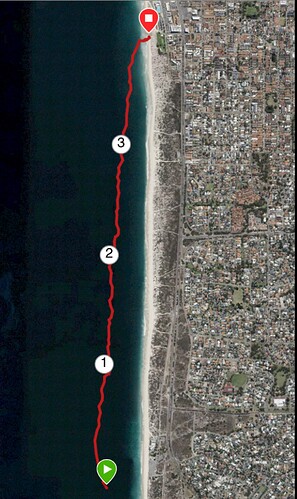 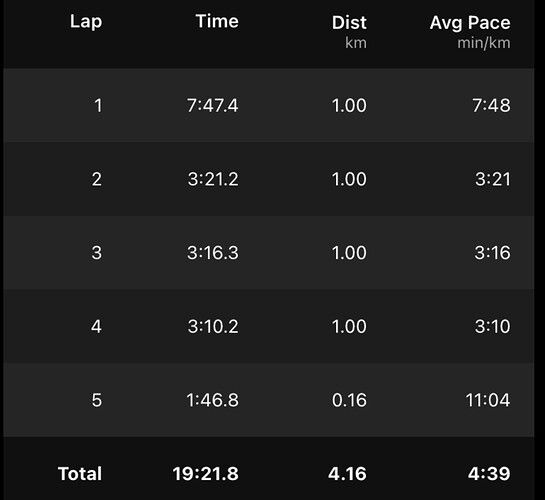 Made total sense. I’m on a custom amundson. 6’6 x 23 @ 100L. Really had a hard time balancing on it at first, but getting much better as time goes by. Glad I didn’t go more narrow to start. Would have made things even harder out in the bumps ( for me at least ).

This is bad ass. Thanks for the update on the shim. Waiting for one to arrive and I’m going to give it a go.

Great to hear! That shim will help out on all Gofoil front wings.

Do any of you guys ever get the sensation you are slightly behind your board on the initial takeoff. I was able to paddle up multiple times today, but a few of those times it was like I couldn’t get my body up and over the nose to push it down to ride out.

I feel like it must be a muscle memory issue… timing when to throw the weight forward before the board takes off. But maybe other things are at play.

Another thing I noticed a few times: I gave up because I was falling behind the bump and thought I’d blown the take off… only to then glide out a ways because I was actually on foil and should have started to peel off left or right.

I agree the flatwater practice paid big dividends when it was game time. I live in NW Montana and we get substantial winds (30-40mph) and wind driven swell up to waist high on some of our larger lakes. I’m running a Kalama E3 and Axis 1310 setup. I’m to the point where on smaller days (20-25mph and 1’+ chop) I’m getting up and having decent rides. I did go out one day when it was 30/40mph and 3’ and got my ass handed to me on that setup. I couldn’t control the 1310 in that much swell energy. I debated going smaller foil size but wasn’t sure I was ready. When there is that much energy and larger swell are pop-ups easier on smaller front wings?

Had first run in a while on the weekend.
Summer of light to no wind was a lot of practice popping up in tiny next to nothing sandbar bumps.
Even with all that I wish I had done more flat water practice.
Couldn’t be more stoked we are able to do this on our lakes!!!’

The board makes such a huge difference. I’m on an older design rectangle shape and getting up is the limiting factor.

Really noticed this time how when you feel the tail drop, nose go high is when I got the most push from a bump. Even if it didn’t look like there was much of a bump there.

On the Axis 1150 and wonder if the pop up is any easier on 1300? For sure can’t afford the 1310 and the HM mast to go with it. Or if adding the plate shim Kane suggested for the gofoil rigs would help?